I'm working with friend on a wind-powered kinetic sculpture. This is a half-scale model out of wood to verify the mechanics.

And here's a road test with the sail attached. I'm calling out engine RPM to estimate speed because the speedometer is not very accurate at low speeds. 1900 rpm equals somewhere between 9 & 10 mph.

This test provided great information about how it behaves in the wind. We're going to try less offset on the crankarm and reduce the amount of travel in the rods. Oh, and make it stronger, too.

Here's a wood sign I made for a friend's woodworking shop, Artsubstrates. This is the first time I've wrapped a 3D shape around the rotary axis. It worked better than expected.

(note: from here on is going to be pretty dull for anyone not building a cnc machine. ...and maybe for those who do, as well.)
I generated the text using "FEngrave" a great piece of software for generating gcode for signs. It does one thing and does it very well. Highly recommended. Then I used another piece of software to take the output from FEngrave and wrap it around the rotary axis.

Some upgrades were required to convert from arduino 2 axis control to 3 axis CNC. Added was new z  axis assembly with stepper motor and controller, new belts and pulleys on the rotary axis to increase the gear ratio, and limit switches on the linear axes.

The new Z axis assembly has 3/8" aluminum plate for the base and the carriage platform, 5/8" O1 tool steel rods for rails and UHMW bearings to slide on. I made another UHMW nut and used the acme threaded rod left over from the X axis. I'll have to re-think the UHMW bearing though -- they slide really smoothly by themselves but take a lot of adjustment to get the carriage to slide without binding with all 4 attached.

The big automobile timing belt and diy pulley were replaced two XL timing belts and pulleys. increases the motor/ axis ratio from the previous 4:1 to 16:1. This provides a lot more holding power against the router and gives smoother rotary axis travel and much finer resolution. With the old belt, there was more backlash that I liked and at larger diameters, one step on the motor translated into as much as .003" of travel. With the new belts and gear reduction, resolution at large diameters is still very fine and I see less chatter during heavy cuts.

The current belts are neoprene with polyester fibers, which do stretch a little and is more noticeable with the double gear reduction. I purchased new belts with kevlar fibers that have very little stretch, but haven't installed them yet.

All this is because these 285 oz/in motors are OK for the two linear axis, but a bit puny for the rotary axis. A motor upgrade on the rotary axis may be in order, but would require a bigger power supply and new controller as well -- not in the current budget. 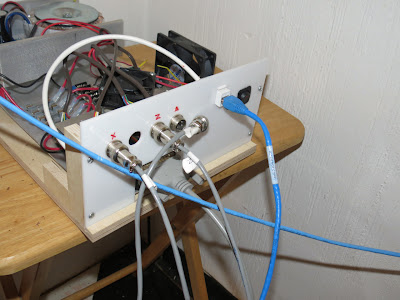 Wiring to the electronics enclosure. 5 pin XLR connectors with 22g stranded cable for the motors and ethernet cable and jacks for the limit switches and e-stop button. There's a vented cover for this enclosure, but after an overheating incident where the cooling fan lost power and the controllers started making real funny noises and smelling bad, I don't have the courage to close it up yet. I'm thinking of putting in a temperature monitor, but that may be overkill. 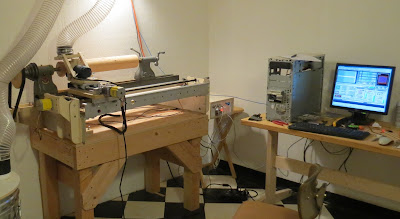 
This is an adapter for a ball-head tripod for use with a spotting scope. A ball head works great for a camera, but not so great with a spotting scope -- it's tough to aim a scope when you loosen the ball and everything gets all floppy. This adapter adds a vertical plane tilt mechanism to the top of the ball head. Just lock the ball tight and use the tripod's pan (rotation) and this adapter for the vertical.This setup allows me to have both options -- a pan/tilt for the scope and a ball head for a camera, without carrying a bunch of gear. Plus, the pan mechanism that came with the tripod on the ball head is amazingly smooth, so I get to use that with both heads.

It has an Arca type dovetail quick-release plate on the bottom that attaches to the ball head on the tripod, and a clamp on top to attach to the scope. 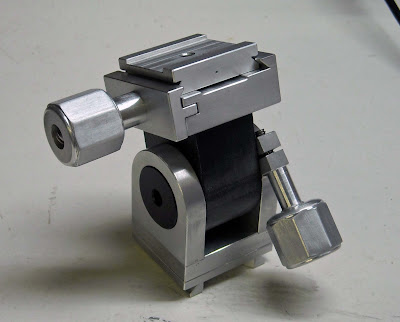 The center pivot block is solid acetal plastic, or Delrin and the rest is aluminum. The acetal against aluminum provides a silky smooth motion. 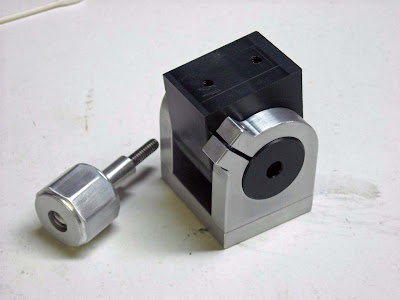 The clamp and plates are compatible with the tripod hardware. The springs fit into holes on either side of the screw and parallel to it to keep the clamp open when not tightened. 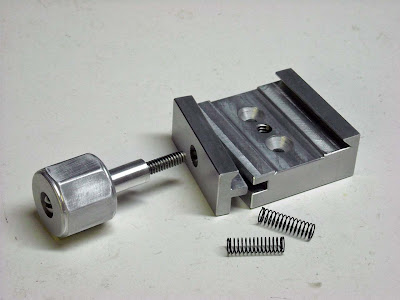 The plate on the left goes on the bottom and is relieved to fit a locking pin in the tripod head's clamp. The one on the right fits on the scope and attaches to the top. 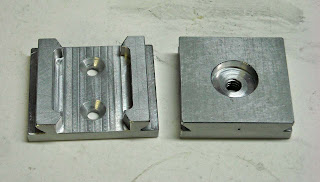 It works great. Smooth tilt, easy to use. I can pop the whole scope / adapter assembly off and use the ball head with a camera. 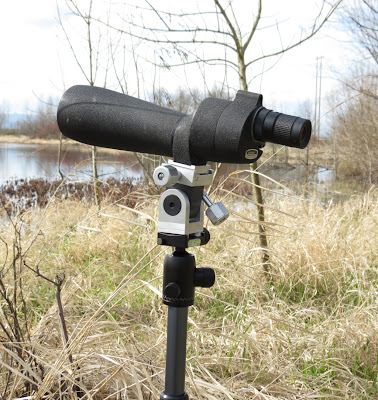 And here's the tripod with the scope and top assembly removed, and a camera on the ball head. It works very well and only takes a few seconds to switch. 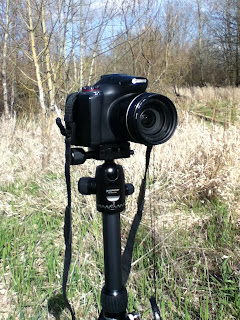 When I started I figured I could find some standard dimensions for Arca Swiss type dovetail quick-release clamp and plate. I didn't have much luck, so I'll share what I came up with. These are what I used, but I had to tweak the clamp side a bit to make it fit. They should be a good starting point, but use them at your own risk. I have no idea if the Promaster tripod they were based on is a standard size.